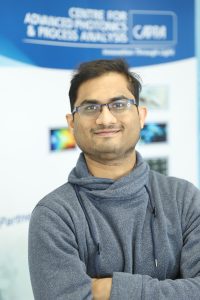 Saroj Kanta Patra received the B.Tech. degree in Electronics and Communication Engineering from Silicon Institute of Technology, Bhubaneswar in 2011 and the M.Tech in Advanced Semiconductor Electronics from CSIR- CEERI, AcSIR in 2013. He worked there as a Q.H. Scientist (T) until 2014. During this period, he worked on the design and fabrication of grating-based structures on top of blue InGaN/GaN LED surface for enhancement of light extraction efficiency. Later he was selected under Visvesvaraya PhD Fellowship at CenSE, Indian Institute of Science (IISC), Bangalore. After a short stint at IISC, he moved to Ireland to pursue PhD at Tyndall National Institute, University College Cork. During his PhD, he worked on tailoring electronic and optical properties of III-Nitride nanostructures. He received publication of the year award and “British Oxygen gases” bursary (Runners up) for his PhD work. He currently works in the CAPPA group at Tyndall National Institute towards design and development of swept-source LASERs at 850 nm. His research interests include (micro) LEDs, LASERs, single-photon emitters, photonic integrated circuits, material characterisation, thin films and nanotechnology.