Air pollution in terms of toxic gas molecules and particulate matter is a major cause of morbidity and premature mortality, resulting in an estimated 4.2 million deaths per year. Real time pollution monitoring with high spatial resolution and public alerts is vital to minimise the exposure of the population, particularly the vulnerable, to air pollution. Direct access to high quality, trustworthy data would allow people and businesses to optimise their daily schedules in order to reduce exposure.

Currently available ambient pollutant reference detectors are either impractical for widespread or mobile deployment (due to size, cost, insufficient robustness), or generally are still not stable or sensitive enough for monitoring ambient pollutants reliably. PASSEPARTOUT will advance the development and deployment of miniature, hyperspectral optical based sensors based on Quartz Enhanced Photo-acoustic Spectroscopy and Photo-Thermal Interferometry for a wide range of ambient pollutants. The PASSEPARTOUT optical sensors operate in the mid-infrared or near-infrared spectral range and allow calibration-free methodologies, as quantification is based on the well-known optical constants of the target analytes and will be compatible with the rigorous certification process.

The sensitivity and selectivity of photonic sensors based on Laser Absorption Spectroscopy (LAS), make them ideal for monitoring numerous trace air pollutant constituents. The  Infrared (IR) region of the electromagnetic spectrum is known as the molecular fingerprint region, as IR light interacts strongly  with molecular vibrational transitions which are predominantly in this energy range. Furthermore, slight differences in molecules results in different absorption profiles, resulting in easily distinguishable fingerprints. The growing interest in IR LAS is due to the recent development of lasers, which are tunable over large-wavelength ranges in the IR, permitting unambiguous detection of numerous substances at low concentrations. They are considerably faster than non-photonic sensors, suffer from minimal drift, offer high specificity and sensitivity for real time in-situ measurements.

Standard LAS systems are based on slight, hard to measure, direct changes in light intensity due to Lambert-Beer optical absorption; Photoacoustic Spectroscopy (PAS) and PhotoThermal Interferometry (PTI) follow very different rules. In PAS, the absorption of infrared photons in a gas sample results in the excitation of molecular energy levels whose energy is released as heat. The generated signal is proportional to the incident light intensity and quantity of absorbing species. Should this intensity be modulated, localised transient heating results, creating two different waves; 1. a weakly damped propagating acoustic (pressure) wave and 2. a heavily damped thermal wave observed only in the vicinity of the exciting light beam. In standard PAS sensors, a microphone detects the acoustic (pressure) wave. In the Quartz Enhanced PAS (QEPAS) approach, a quartz-tuning fork (QTF) is employed as the electrical transducer. The IR laser beam is focused between the QTF prongs and when the laser beam is modulated at the resonance frequency of the QTF, the generated acoustic wave deflects the two prongs in opposite directions, creating a piezoelectricity signal proportional to the absorbing analyte concentration. QEPAS provides great stability, compactness, capability to analyse small gas samples, requires no optical detectors, covers a large linear dynamic range (from few % to part per trillion range) in real time and has low power consumption and cost. Conversely, PTI monitors the photon-generated thermal wave through the refractive index (the refractive index is temperature dependent). PTI shares many of the features of QEPAS, but is not connected to any mechanical resonance, which gives an advantage in certain gas matrices. 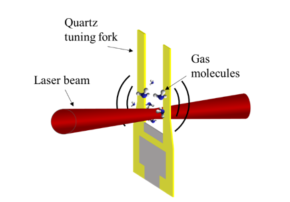 As part of PASSEPARTOUT, CAPPA will advance the development of mobile, miniature and hyperspectral QEPAS and PTI sensors, for a wide range of ambient pollutant gases (NOx, SO2, NH3, CH4, CO, CO2) and black carbon, all significant contributors to morbidity and mortality. The innovative and high-performance technologies will be built on robust drone-mounted, low-cost vehicle-mounted and stationary sensors, creating the first 3D mobile gas analyser network, with extremely high precision and good spatial resolution. The analysers will be deployed within urban areas, around landfills and seaports. Collected data will be combined with weather data and analysed. PASSEPARTOUT will then generate air quality forecasts, which will be provided to the public via a freely downloadable Pollution Monitoring App (PMA), with options to customise the forecasts based on the users’ preferences.

CAPPA staff have over ten years’ experience working with photonic sensors with a specific focus on air quality monitoring in recent years. You can learn more about photonic sensing here and about CAPPA’s currently active research projects here.

PASSEPARTOUT has received funding from the European Union’s Horizon 2020 research and innovation programme under grant agreement No. 101016956, in the context of the Photonics Public Private Partnership.